presented by Sound Of Liberation

One of the hottest stoner rock bands of 21th century, STONED JESUS are back on track! With their long-awaited fifth studio album on the horizon, they hit the road with songs old and new to meet their ever-growing fanbase. The setlist includes everyone's favourite "I'm the Mountain" epic from the now-legendary Seven Thunders Roar (2012) album, which boasts 15 million views on YouTube alone. Even without the smoke and mirrors of major stage production tricks, the STONED JESUS' live performance is a show to behold, so go ahead and treat yourself!

Like clockwork, Swedish stoner rockers GREENLEAF spread their concentrated sludgy energy to disciples of the genre by releasing Echoes From A Mass in 2021, the successor to their 2018 epic, Hear The Rivers. The album opener, “Tides”, immediately draws the listener into a swirl of guitar driven soundscapes, while Arvid Hällagård’s remarkable voice merges with hypnotizing background vocals, ceremonially inviting the listener into a heavy reverie. Floating hypnotic grooves set the stage for the compelling yet chilling “Needle In My Eye” — with its incisive, driving drums and roaring riffs, the record’s third song accumulates piece by piece into a modern rock standout, taking the mind by storm. “Love Undone” breaks in with Tommi Holappa’s acclaimed, blistering guitar riffs that will keep the listener moving to the mesmerizing, distinctive sonic layers of GREENLEAF. The bluesy mid-tempo track “Bury Me My Son” digs deep with its poignant lyrics and an extensive, grooving bass solo, reminiscent of their roots in the Dozer days. With “March On Higher Grounds”, the Swedes deliver a dusting of desert-vibes, merging into a truly catchy refrain, while closer “What Have We Become” offers a hallucinatory realm of calmness, setting a bold exclamation mark at the album’s epic end. Once again, GREENLEAF prove that they dare to think outside the box and deliver a heavy roller comprised of Sebastian Olsson’s rumbling drumming performance, fuzzy guitars, Fröhlich’s haunting bass lines, Arvid Hällagård’s powerful yet ghoulish vocals and undeniable, heavy stoner, southern desert and blues vibes. Echoes From A Mass was recorded at Studio Gröndahl in October 2020 by former band member Karl Daniel Lidén, who also mixed and mastered the record at Tri-Lamb Studios. Lidén is recognized for his work with well-known acts such as Katatonia, Bloodbath, Lowrider and Crippled Black Phoenix, to name a few.

Somali Yacht Club is a psychedelic stoner rock trio from Lviv, Ukraine. Started in 2010 as the idea of members of different Lviv bands to jam together, became a main band for all members soon. In 2011 self-released the demo EP called Sandsongs. Played numerous shows in Ukraine and shared stage with bands like Elder, Kadavar, Red Fang, The Machine, Stoned Jesus, Mars Red Sky and others.

First album "The Sun" was been released on September 11, 2014 (Robustfellow). After 2015 release of LP "The Sun" (Bilocation Records) went on first European tour with Ethereal Riffian (UA).

In 2018 was released second album "The Sea" (Robustfellow, Bilocation Records). Went on tours after this with "Straytones" (UA), "Stoned Jesus"(UA). Played at Void, Swamp, Keep It Low and Garmonbozia festivals. 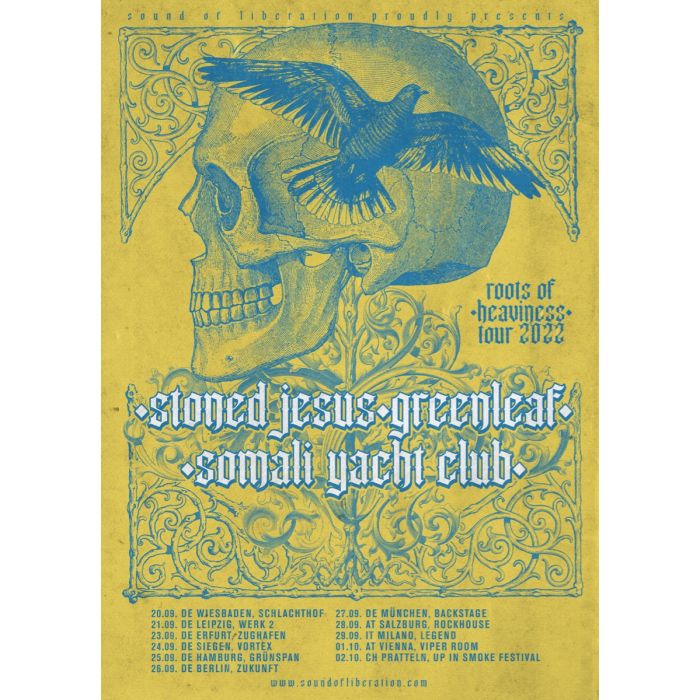